Most of us live in a pretty awesome world, living good lives with healthy bodies. But there’s plenty others who aren’t so privileged, and thanks to bad numbers in the genetic lottery everyday life can be something of a struggle. Like being blind, for example. Can you imagine how hard life would be? It certainly was for this guy, who for 16 years hadn’t even seen his own family. Then everything changed.

The man in question is Gene Purdie, an otherwise regular guy from Denver. He had a steady job, an adoring wife, even a baby boy. His life was normal, average, run-of-the-mill, standard. Oh, except for one thing: he’s totally blind.

How Blind Is He?

It all started 16 years ago, when Purdie was diagnosed with a rare disease. It was Stargardt’s disease, and within a horrifically short space of time he was legally blind. He could see the world, but everything was just a vague, blurred outline to him. Remember that episode of Black Mirror where the guy gets “blocked”? That was his life, all the time.

What The Heck Is Stargardt’s Disease?

It’s not common at all, but it can strike anyone and at any time. Doctors still don’t know what causes it, but the effects are pretty plain: rapid degeneration of the center of the retina. This part, called the macula, is responsible for focus and straight-ahead vision. So if it ain’t working, it’s like looking at everything through several panes of frosted glass.

It wasn’t until after his eyesight degenerated that he met the love of his life, Joy. From the beginning he couldn’t see her properly – a blind date in the truest sense – but how she looked was not important to him. They couldn’t get enough of each other, and were soon married. Just over 10 years later, they had their first child, a kid named Lincoln. 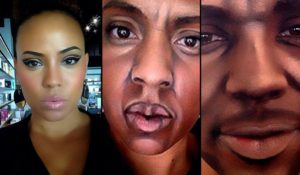