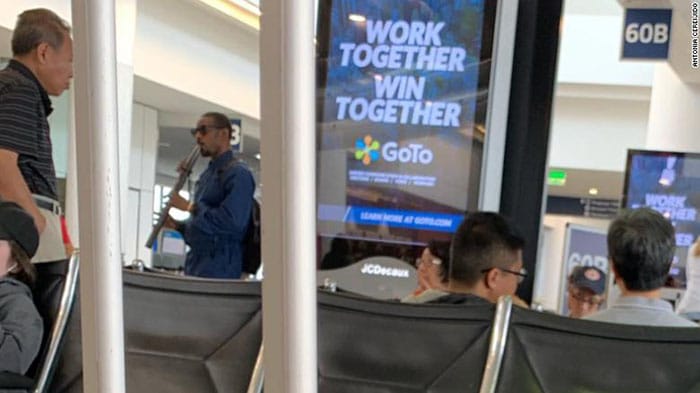 The ever-enigmatic Atlanta rapper and half of the hip-hop duo OutKast was spotted Friday at Los Angeles International Airport keeping his musical skills sharp. At first, traveler Antonia Cereijido thought she was losing her mind when she saw a man who looked like the rapper walking around her terminal playing a flute, the producer for NPR’s Latino USA told CNN.

It turns out that man was, indeed, André 3000. Cereijido asked the rapper about his instrument, which he said was an indigenous double flute, she said. Cereijido snapped a quick photo with him, uploaded a tweet about their en-counter, then boarded the same flight André 3000 was taking.

By the time Cereijido landed in New York, her tweet had been liked about 68,000 times, and it was the No.

Cereijido didn’t expect her tweet to go viral and was worried the rapper might feel it was an invasion of privacy, she said, so she talked with him again after they landed.

He recognized her right away and he was very kind about it, Cereijido said. Here’s a closer look at André 3000’s flute, captured by traveler Fernando Tomas Lauer.

This Article Was First Published on “edition.cnn.com“